Marine Transportation: Our links to the outside world

THE UNION STEAMSHIP COMPANY
The legendary Union Steam Ship Company (USSCo.) operated up and down the BC coast between 1889 and 1959.  For hundreds of people living along the coast of BC, the USSCo was one of the only links to the outside world.  It was an essential part of BC life during the late 1800s and early 1900s and was truly the lifeline of the coast.

The Sunshine Coast Museum & Archives has a significant collection of artifacts from the Union Steamship Company including dinnerware, a deckchair, life preservers from the S.S. Catala and Lady Cynthia, a compass, and a captain’s hat.

Before Highway 101 connected the communities along the coast, boats were the transportation of choice.  Each community had a wharf and was thus able to receive people and supplies via boats. Union Steamships started serving the Sunshine Coast about 1891 with the S.S. Comox making the run across Howe Sound. The first SS Capilano, built in the same year, was another ship that serviced the Sunshine Coast. After the first was wrecked near Savary Island in 1915, a second Capilano operated for another twenty years.
​ 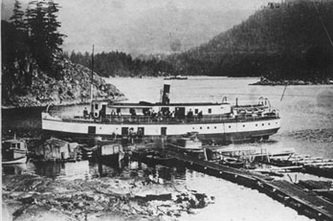 The S.S. Comox tied up at Gonzales and Dames floats at Irvine's Landing, Pender Harbour, 1911. 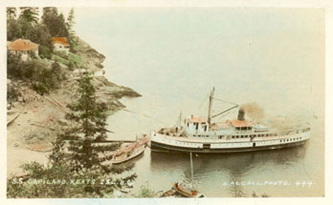 The S.S. Capilano at Keats Island, 1930. Helen McCall photograph.
One of the best known steamers that plied the Sunshine Coast was the S.S. Catala. The 218-foot ship was launched in 1925 in Montrose, Scotland, and carried coastal freight and passengers from Vancouver to southeast Alaska.  The name Catala derives from the Roman Catholic missionary Father Magin Catala who came to Santa Cruz de Nootka on Vancouver Island in 1793.

The Lady Pam was also a distinctive ship with its clipper bow. It was launched in 1883 in Glasgow, as the Santa Maria.  Later purchased by the All Red Line in 1904, it was sold to the USSCo in 1917 and renamed the S.S. Chilco.  When rebuilt in 1935 it was renamed the Lady Pam. 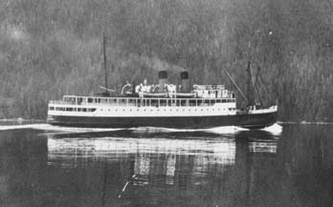 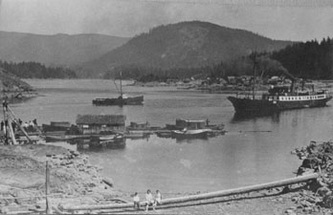 Photo by Gilbert Lee of Lady Pam at Irvine's Landing in 1925, when the vessel would have been known as the S.S. Chilco.
The S.S. Chasina was built in 1881 in Glasgow as the steam yacht Santa Cecilia for the Marquis of Anglesea. She was renamed the Selma in 1917 and operated on the Vancouver to Powell River route before being purchased by Union Steamships in 1917. She was then renamed the Chasina after the policy of the time to use west coast Indian names beginning with the letter 'c'.

In 1924 Union Steamships launched a vessel configured and licensed such that she was the largest capacity excursion ship north of San Francisco, the Lady Alexandra which made many summertime calls to Gibsons Landing. By the mid-1930s Union Steamships offered one-day cruises aboard the Lady Cecilia to Sechelt and Pender Harbour area, also known as the “Gulf Coast Riviera.”  They could also call in en route to Roberts Creek, Selma Park, Half Moon Bay, Buccaneer Bay, Vaucroft Beach, and other destinations.  One could also cruise for a day on Howe Sound around Anvil Island, Gambier Island, and returning around Keats and Bowen Islands. 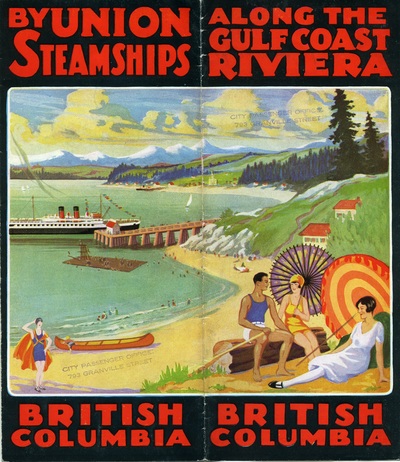 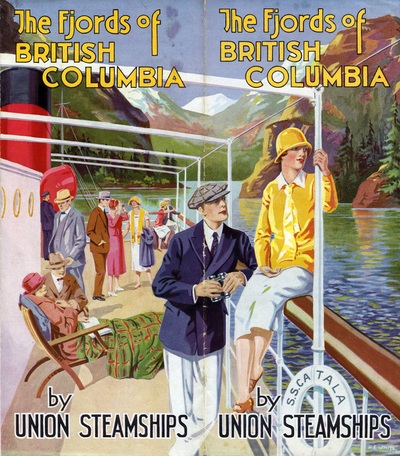 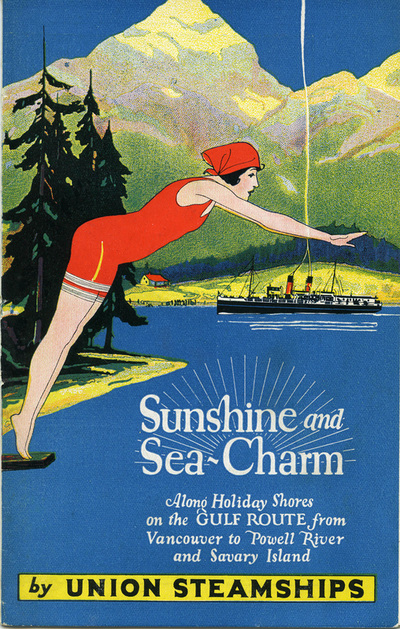 Many of the Union Steamships had mishaps on B.C.’s rugged coast.  The Lady Cynthia was a former minesweeper purchased from the British Admiralty in 1925. On her first trip to Powell River in 1925 she had an accident off Sechelt when she collided with the Cowichan which sank but with no loss of life.

The Catala ran aground on Sparrowhawk Reef near Prince Rupert in 1927.  The Lady Cecilia ran aground at Pender Harbour on Christmas Eve, 1940. Later she collided with a freighter off Point Atkinson near Vancouver in 1944.  The Catala ended her career with the USSCo. in April 1959 and was to be turned into a fish-buying ship when developers refurbished it as a floating hotel on the Seattle waterfront for the 1962 World's Fair.  Upon being moved on New Year's Day, 1965, a storm with 70 mph winds and high seas tipped the Catala 30 degrees on its side in the sand near Ocean Shores, Washington and it could not be righted.
By 1951, when ferry service to the Sunshine Coast had begun, Black Ball Ferries Ltd. (Canada) had four ships available to serve BC routes.  A fifth ferry, the Smokwa, was acquired in 1956.  The first Sunshine Coast route was inaugurated on August 11th, 1951 between Horseshoe Bay and Gibsons using the Quillayute, to be replaced in 1951 by the Bainbridge and supplemented by the Smokwa in 1956.  The Quillayute was moved to the Earls Cove-Saltery Bay run when it opened on August 21st, 1954. 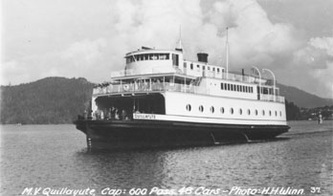 The MV Quillayute in Gibsons harbour, 1951 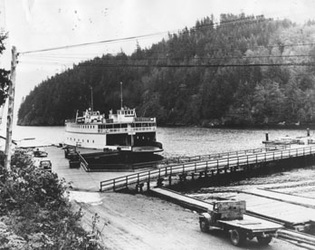 The MV Bainbridge at Snug Cove, Bowen Island 1950s No car loading dock was in place at this point.
The other two ferries, Kahloke and Chinook II, were initially used on the Horseshoe Bay-Departure Bay run.  In 1961 the B.C. Provincial Government bought out Black Ball Ferries on behalf of B.C. Toll and Bridge Authority for $6,690,000.  Black Ball's five ships were renamed and formed part of the growing "Dogwood fleet" of BC Ferries.   The story of those vessels is recounted here: 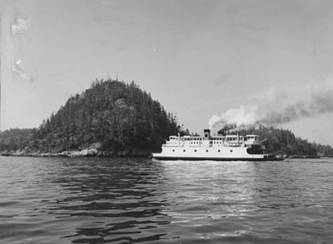 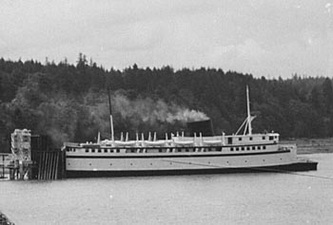 Black Ball Ferries vessel M.V. Kahloke at Departure Bay near Nanaimo. Later, she was renamed the M.V. Langdale Queen and put on the Horseshoe Bay to Langdale run.
BC Ferries later acquired a sixth ship, the Sunshine Coast Queen.  She was originally used for the Michigan State Ferry and named Vacationland. Replaced in 1957, she then operated across the St. Lawrence River as the Pere Nouvel.  Built at River Rouge, Michigan in 1951 and after sailing through the Panama Canal, the ferry was put on the Horseshoe Bay-Langdale run in 1967 to supplement the Langdale Queen and replace the Sechelt Queen.  The Sunshine Coast Queen was affectionately called the "Suzy Q" until retirement in 1976.