shishalh Nation
The Halfmoon Bay area was originally occupied by the shishalh Nation who have lived and thrived in this region since time immemorial. Archaeological studies have recorded 38 recognized sites containing shell middens, rock shelters and stone fish traps, now protected by the provincial Heritage Conservation Branch. European exploration of the area began in the late 1700s by the Spanish (Captain Galiano and Captain Valdes) and the British (Captain Vancouver). Through the effects of colonialism, the shishalh Nation and it's rich culutre were devastated; with the Indian Act and the implementation of Residential School playing a primary role.
Arrival of the First Europeans
One of the first Europeans settlers to the area was Frederick Sargent after whom Sargent Bay was named, previously Northwest Bay. He applied to purchase D.L.1324 on March 31 1892 at the head of the bay, marshland that attracted a wide variety of birds and animal life. Sargent was determined to farm the land and spent much of the first years there ditching, building dykes, constructing a dam and building floodgates. He also logged the property and set up a steam-driven sawmill at the mouth of Colvin Creek.

Extensive forest stands and the ease of water transport to Vancouver made logging a major activity in Halfmoon Bay. Abundant year round fishery stocks also helped shape the development of the area. Originally known as Cod Fish Bay, commercial canneries once dotted the intricate coastline. 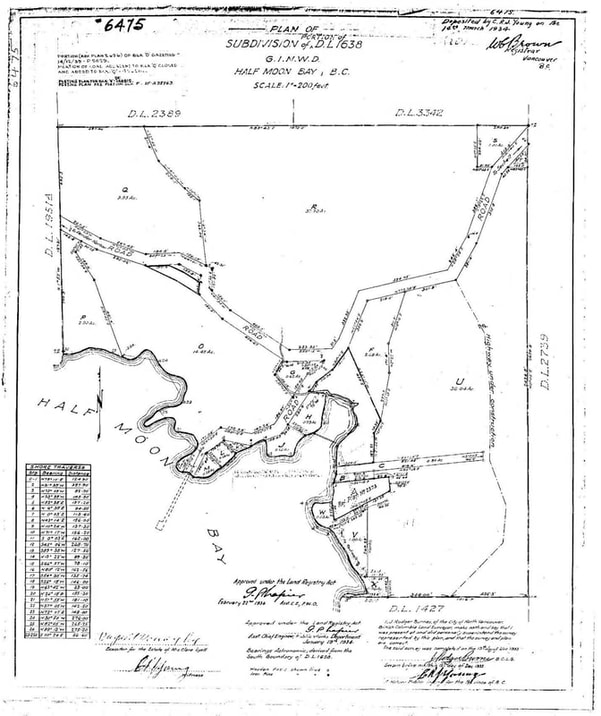 Further Development
Settlers Charles & Clara Priestland arrived in Vancouver in 1889 and were married in Vancouver on October 10, 1889. Charles pre-empted D.L.1638 in Halfmoon Bay sometime in 1892 (125 Acres) and around this time, 32 years old Clara Priestland left her husband and headed alone for Halfmoon Bay which was to be her home for more than 40 years. In 1908 Clara purchased D.L.1638 from Charles for $300.00 that included water frontage right at the head of Halfmoon Bay. She built a log house on the site and became postmistress, a position she held for many years. When her log house burned down a few years later, she built another home close by. In her early days at the Bay, the Post Office was known as Welcome Pass.  The Bay was surveyed in 1910 and the name "Half Moon Bay" first appeared on Admiralty Chart No. 2078 published in 1912.  The spelling was changed during the next few years and the post office name was officially changed in January 1915 to Halfmoon Bay Post Office. There was no wharf in Halfmoon Bay in those days and the postmistress' duties involved rowing out to Welcome Pass in all weather to meet the coastal steamers which carried the mail. With the post office went a single line government telegraph, with each station having a set time each day to relay and receive its messages.

Railroad logging operated at the turn of the century in an area of 2470 acres north of Trout Lake. The railroad eventually dismantled and rails and machinery were shipped to Powell River. Remnants of the original rail bed, ties and spikes can be seen near Trout Lake. Railroads were replaced by plank roads which tended to run at right angles to the shoreline following the grade of creeks.

The Halfmoon Bay region was not connected to the rest of the Sechelt Peninsula by road until 1928 - transport until then was by water. The Union Steamship Company played a major role in the development of the area at this time, providing a vital link to the outside world. The first record of Union Steamship activities in the area was in 1895, providing passenger, mail and freight service. The name Redrooffs was given to this part of the Halfmoon Bay area because the predominantly red roofs of summer cottages could easily be seen by these ships entering the bay.

By 1933 two main plank roads extended from the present site of the Halfmoon Bay government dock - the west road followed Halfmoon Creek, the east road followed Milne Creek and joined the main motor road (presently Highway 101) at the north end of Trout Lake. Sargeant Bay was another hub for a network of logging roads, following Kenyon and Colvin Creeks.

Logging during 1910-13 and 1929-33 was primarily done by the Halfmoon Bay Logging Company. They had an average daily capacity of 120,000 board feet, taken mostly from areas around Trout Lake and south of Crowston Lake, which produced 65,000 board feet per acre of hemlock, fir and cedar.

William T. Franklin was the area's first lighthouse keeper (at a salary of $360 per year). He and his wife manned the light on Merry Island for thirty years, a welcome sight to a community dependent on safe maritime passage along a rugged coastline. He eventually pre-empted part of the island as a farm and lived there in retirement for another twenty years.
​
Smuggler Cove takes its name from the infamous pirate William Kelly, the King of Smugglers. He transported illegal chinese immigrants from Vancouver across the US border by sea, for the hefty fee of one dollar each. He evaded arrest by hiding in Smuggler Cove. During the Prohibition of the 20's, the cove was used to store bootleg liquor en-route from the stills on Texada Island to the rum-running boats heading to the States.
_________________________________________

Information compiled by Heather Till for Bigpacific.com
​
Sources: