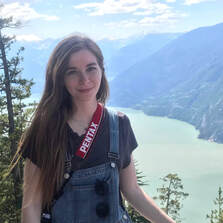 ​Allie is an interdisciplinary visual artist from Nova Scotia. She attended the Nova Scotia College of Art and Design as well as the School of the Museum of Fine Arts at Tufts, where she received her BFA in Studio Art. She has previously worked at   institutions such as the Banff Centre for the Arts and Creativity and the Audain Art Museum. Outside of the museum, Allie can be found hiking with her film camera and identifying local flora along the Sunshine Coast.
Allie Rose Bartlett
Curatorial Assistant
scm_a@dccnet.com