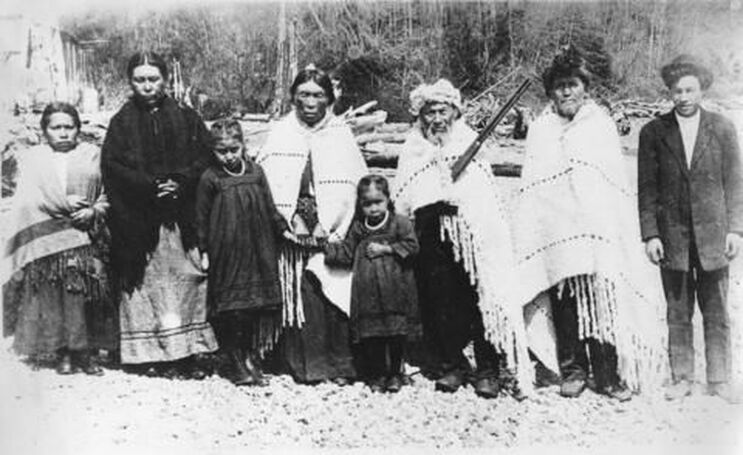 Squamish Nation residents of Ch’ḵw’elhp, one of the Squamish Nation villages located in the present-day Gibsons area.
First Nations
Since time immemorial, this region has been home to the Sḵwx̱wú7mesh Úxwumixw (Squamish Nation) and shíshálh Nation (Sechelt Nation).  For millennia, both Nations have thrived here, creating rich cultures celebrated for a deep connection to place and understanding of the coastal landscape.  Stone tool artifacts found on the present-day Sunshine Coast date upwards of 10,000 years before present and represent a continuous occupation of this area.  For both the Sḵwx̱wú7mesh and shíshálh Nations, their territory is considered unceded, meaning that no official treaty was ever signed allowing for the transfer of lands to the federal or provincial governments.  Preceding the colonization of their traditional territories by European settlers, small pox ravaged both Nations close to the point of extinguishment. The disease was brought to the continent by settlers in various waves from the 1600s - 1800s. As recognized in the Truth and Reconciliation Commission, residential schools were then created by the government "for the purpose of separating Aboriginal children from their families, in order to minimize and weaken family ties and cultural linkages, and to indoctrinate children into a new culture." The long-lasting effects of colonialism are felt today by all First Nations across Canada. Despite the unimaginable cultural trauma experienced by the First Nations through colonization, the Sḵwx̱wú7mesh and shíshálh people continue to thrive in their traditional territories, demonstrating a great resilience and generosity of spirit.

Visit tems swiya Museum in Sechelt, BC and the Squamish Lilwat Cultural Centre in Whistler, BC to explore world-class exhibits featuring the rich and diverse histories and present-day activities of the Nations.
​
Location & Geography
The Sunshine Coast is located on the southern coast of British Columbia, Canada, between the entrances to Jervis Inlet on the northwest, and Howe Sound on the southeast. The rugged mountains bordering these inlets cut it off from direct road connection to the rest of the province, so although part of British Columbia's mainland, it depends on ship or air transportation.
​
The Sunshine Coast's 86 km of coastline is home to a variety of small tight-knit communities extending from Port Mellon to Egmont.  The largest population centers are located in Sechelt and Gibsons, and although the Sunshine Coast is part of the BC mainland, it is only accessible by sea or by air. 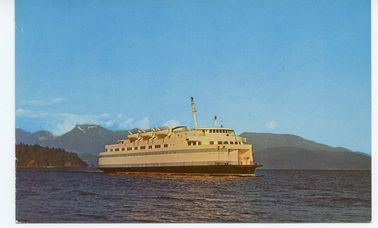 Postcard of the Sechelt Queen (#4631)
Sunshine Coast Name Origins
The re-naming of this region to "The Sunshine Coast" originated with settler family, the Roberts of Roberts Creek. In 1914, Harry Roberts painted "The Sunshine Belt" name on the side of the freight house on the first wharf built in Roberts Creek, and the the name was apparently used to promote Roberts Creek as a summer resort destination. When the Black Ball Ferries started a car ferry service to the coast in 1951 they started using the term "Sunshine Coast" to promote the whole area from Port Mellon to Pender Harbour, and the name quickly became popular.
​
European Arrival & Settlement
It was first visited by Europeans during voyages of exploration in 1790s, and much later in the 1870s began to be selectively logged by crews from the Moodyville sawmill near Vancouver.